It’s been five years since Shelby Lynne last released a solo album — a gap she says she’s enjoyed leading up to her new self-titled effort, whose track “I Got You” is premiering exclusively on Billboard today (April 2).

“Sometimes it takes a long time to cultivate the material that you want to slip out there into the universe, and sometimes it doesn’t,” Lynne tells Billboard. “This record, it took a little time. I wrote a lot of songs for it and then had to choose ‘em and all that. Sometimes it happens really fast, but you can’t rush it, either.”

It’s not like Lynne has been idle since 2015’s I Can’t Imagine. During the interim she recorded an album with her sister Allison Moorer, 2017’s Not Dark Yet, and she appears in the new indie film When We Kill the Creators, which is currently seeking distribution. She contributed two songs to the latter, a project Lynne says helped to inspire Shelby Lynne in general.

“The songs started coming,” she says, “and then the movie was presented to me, and the movie enhanced the writing process and vice versa. Inspiration comes from wherever, y’know? I wanted the two things to come out together, but it didn’t work out that way. Hopefully there can be some cross-promotion and one hand will feed the other.”

The 11-track Shelby Lynne, a spare and emotionally weighty, introspective set due out April 17, features a variety of players, including Benmont Tench from Tom Petty’s Heartbreakers, but is primarily a showcase for Lynne as a musician as well as a singer and songwriter. She plays guitar, bass, keyboards, drums and saxophone — the latter taking her back to her eighth and ninth grade school band days. “I was pretty apprehensive about that, but at the end of the day I thought, ‘What the hell. What can it hurt?'” Lynne explains. “I’ve certainly listened to a lot of sax playing in my time. I still can’t play piano, really, but I like certain sounds and chords, so I did that. I like to be inside myself a lot when I make music; Rather than try to explain to a group of players what I want, if I do it, it makes it unique.”

Amidst “a bunch of longing love songs,” she says — “I Got You” is a moment of light, what Lynne calls “a straight, happy love song.” She wrote it on guitar and brought in Tench to play Wurlitzer piano. “It turned into this cool R&B tune,” Lynne says. “The words are just letting somebody know that sometimes love can be overwhelming and confusing and take the life and breath out of you — but in the end, ‘I got you’.” Lynne’s stacked vocal harmonies, meanwhile, give the song a vintage girl group flavor.

“Harmony singing is what I love and live for,” she says. “I try to write melodies that channel harmonies. I tend to think ahead to what harmonies will work on just about anything I write.”

Shelby Lynne is also the first time in 30-plus years of recording that Lynne opted for a self-titled set, which she says also reflects the material within. “I didn’t want to narrow [the title] down to just one song on the record ’cause the songs are all really different, even though thematically they’re all love songs,” Lynne notes. “I thought, ‘What the hell. It’s time. I’ve never had a self-titled record, so why not now?'”

Listen to “I Got You” below. 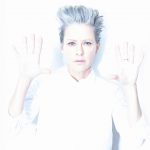